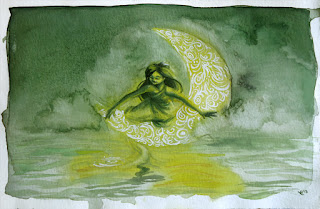 Almost the end of the month! My gosh, time does fly. Now, excuse me while I hurry to finish this book - but I leave you with a Yellow Moon, and got another one for tomorrow...
Posted by Unknown at 1:12 PM No comments: Links to this post 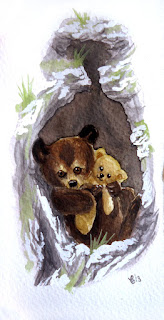 So, didn't I tell you? I want a bear too n.n So naturally, when you have two tiny twin pieces of watercolor paper you do both :D

In this case, a Bearception. It's a bear holding a bear.
Posted by Unknown at 1:10 PM No comments: Links to this post 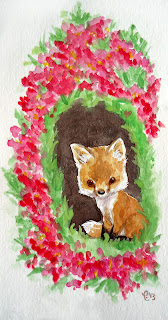 When I grow up, I want a fox for a pet. A fox, and a bear. It's highly illegal and dangerous, and yet I feel they'd be the most amazing pets ever - one for running around with, the other for falling asleep on. I think I've said this before several times n.n (This is also why I'm OBSESSED with this ad)

On the other hand, I really need a scanner. Not only are my latest posts super dark and grayish because of the lightning we have by day (have you noticed???), but also because pieces like this one are TINY. I think this one must be something around 4.5'' x 3''... not good for details u.u 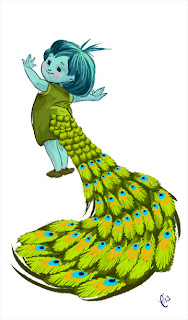 I know. I need to practice my digital painting almost as often as my watercolors. So today, since I was so so mentally tired, I decided to just play along with my tablet. And this is the third result of those games... I rather like it :D

I remember there was a time when I was little when I wanted to be blue. You can blame Freddie Moore for that.
Posted by Unknown at 8:55 PM No comments: Links to this post 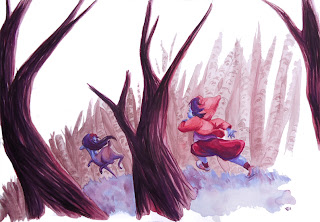 Sooooooo whenever a topic speaks to me, I throw away all the things I need to do and procrastinate my work with work. It sucks, because I stay behind, but I guess that's what happens when you work in what you love... :)

So this is made for the CSFL's challenge of the week, "Dans le forêt" or "Into the Forest" :D And I took the liberty of playing around with some colors...
God, I love drawing trees :D I need to go to the Bois de Vincennes to go crazy with it n.n 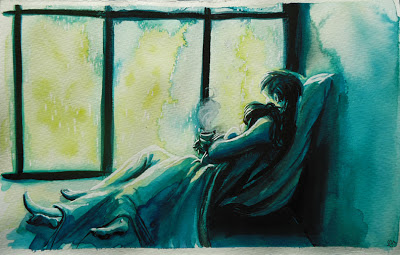 Damien Rice is one of my absolute favorite artists ever. I love the quality and the texture of his music, the ethereal lyrics and the eternal quest for meaning in his work. So there should be no surprise that he's ever present in my mp3 player, or that I keep interpreting his music in my work when I find creative blocks or want to experiment or warm up.

So here's my interpretation of the sad, "I changed my mind" The Animals Were Gone. I'm working, as I said before, on a couple of personal children's books, and starting work on the third - which is being done in a co-production with a writer in Vancouver, and I'm really excited about. But in the meantime, you shall continue to get little pieces like this from me ;D
Posted by Unknown at 12:14 PM No comments: Links to this post 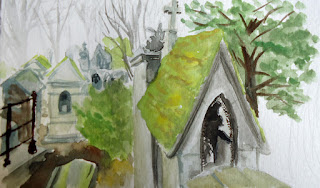 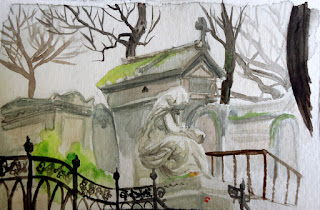 It's official. I'm in love with Pere Lachaise. I know it's creepy and weird, but I am. It's the one place I can hear myself think, so it's where I've ran to the two times things have been hardest or the scariest or the weirdest since I've been here in Paris. And it's great - it's so unbelievably pretty, and it really lets me go out of there ready to go straight back to creating.

I think it's mostly about the hidden corners and the abandoned places - but it's also that my childhood and my adult, romantic self are there. Funnily enough, my childhood is Jim Morrison XD I've been a flower child since forever, I swear XD And well... I'm just desperately, utterly in love with Chopin. He makes everything better. Hence, when I went over before the year ended, I just had to stop and watercolor - even though I had already sketched before n.n

I'm currently working on not one, but TWO children's books - and also starting sketches for the third ;D So in order to not become a total shut in, I'm now out working in cafe's, parks, Starbucks - whatever I can find. If you want, feel free to come on down - we can sketch and hang out n.n

Oh, and this is beautiful. I guess now it's obvious why, but Ólafur Arnalds makes my life prettier :D
Posted by Unknown at 9:22 PM No comments: Links to this post 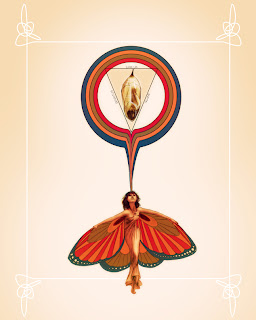 
There's a contest going on at Creative Allies to make a poster for Tristan Pretymann. When I read the full description of the album and the way the title had been selected from it, I immediately felt a personal connection to it all. Me, I've just been through a series of harsh, rough changes and trials that I expect would eventually lead me to the same rebirth. So I was automatically drawn to the project.

I started sketching and arrived to the final idea a while ago, but a series of already hinted to events turned this into an actual revelation, almost magical!!! 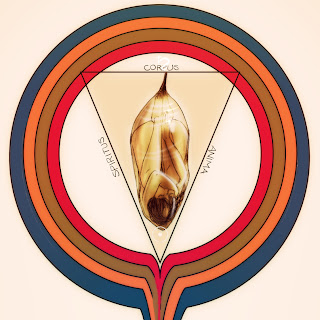 My proposal features a woman who's going through an alchemical process of metamorphosis. Alchemy, or the Art of Transformation, is defined by Alejandro Jodorowsky as "Alquimia es la materialización del espíritu, al mismo tiempo que la espirilituación de la materia.", meaning "Alchemy is the materialization of Spirit, at the same time as the spiritualization of Mather." Hence, I turned around the alchemical symbol of transformation - the triangle - to turn it into an internal, spiritual transformation, making it coincide with the notions of meditation that speak of taking the material inwards to attain spirituality and reach an inner conscience.

Also, the cocoon and the butterfly go beyond the obvious cliché. At first I was trying to avoid it, but while doing some research I found out that the term chrysalis (the pupal stage of butterflies, often mistaken with the cocoon) is derived from the metallic gold-coloration found in the pupae of many butterflies, referred to by the Greek term χρυσός (chrysós) for gold. Not only that: the cocoon itself, apparently, is what binds and makes the butterfly struggle in a perfect amount of time in order to perfect the process: the most difficult, apparently painful part of the process is what brings beauty and flight to it's body. 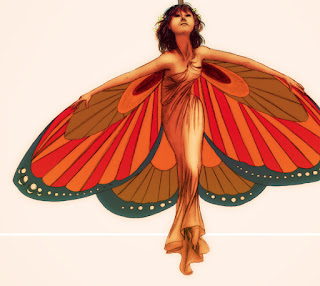 All in all, my goal was to achieve a simple yet striking and poetic poster that encapsulated the concept behind the album, the title and the music, without losing coherence with the line already dictated by the album. I'm really happy with the final result. This is it - if you like it, feel free to vote for it at Creative Allies - even though the final call lies with the artist. Let's hope she likes it too! :D 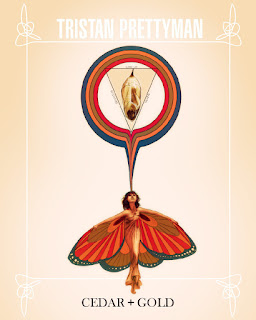 Posted by Unknown at 11:56 AM No comments: Links to this post