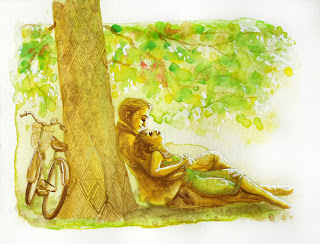 A little bit of experimentation :D Had a lovely walk in a lovely wood, and I was going berzerk with textures and colors - taking pictures everywhere. I now have my very own snail shell for watering my pencils. In a few months, it'll be full of color, I'm sure :D
Posted by Unknown at 11:24 AM No comments: Links to this post 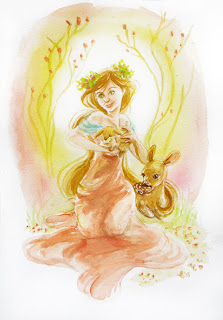 It's spring, you guys!!!
Well... or at least... it kinda wants to be. I mean, birds are singing and all, and yes, I'm starting to see some flowers outside, and last night I was able to walk by the Canal at 2:00 am and not really be cold - quite a relief after last's week's same walk in the snow. But come on! I cannot even take a decent picture of this work because there's no sun!! (Which is why I'm posting this today rather than yesterday :( Can we pretend I did it on time??)

Bref. (BWAHAHA French permeates my everyday language). *ahem* ANYWAY. I just went girly crazy on this piece and allowed my deepest inner influences to come out. GUESS WHO. C:

*Edit: The sun heard (read?) my rant and allowed me to take a slightly better pic of this. Still need to scan, though...

Note: If you couldn't guess, it's clearly this guy.

Posted by Unknown at 11:51 AM No comments: Links to this post 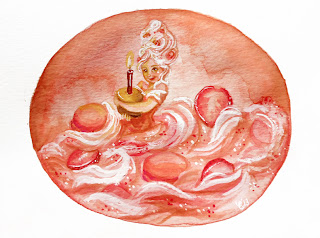 Well well well. Last week was rough. I got bitten, got my head open (a tiny bit, but there was blood involved) by a falling robot, got lost at 2:00 am and slipped on the ice in the pavement in the middle of the street. Try and guess which one's the fake one (yes, just one is fake!).

However, there's also plenty of good news - beyond my vanity that urges me to mention I bought shoes and a skirt that goes whoosh when I twirl. I got included in the Ólafur Arnalds For Now I Am Winter artbook with this piece - you get the artbook when you order the album in the US Official Store.

And also, I received notification that this other piece will be exhibited at Bogotá, Colombia, in the Salón de Ilustración Imagen Palabra, from April 8th to 13th. Still don't know the other exhibitors, but I'm excited as heck :D The piece itself is digital, so obviously the exhibited one will be a print - but boy, it's exciting! :D

Did I say how happy I am?

And well, got loads and loads of things to paint. I mean, LOADS. But in the meantime, I've been sketching loads of people on the metro... I'll be posting them now and then in twitter to make up for the lack of posts here - feel free to stalk! :D
Posted by Unknown at 4:07 PM No comments: Links to this post

I didn't want to post this yesterday. I draw girls ALL THE TIME, so I guess there's no need for me to be repetitive and post also on Women's Day...
So yep. Butterflies and girls, any day, all day long.

I also did a marathonic, 24 hours but super super super fun 'Bande Dessinée' for viedemerde.fr, and it got published also in fmlife.com. If you wanna take a look, feel free to pop in - if you came here because of it, HOLA!!! :D Nice to see you around!

Edit: For the people who have asked: unfortunately, no, I do not have a cat nor have ever had one. I would love one, seriously - but I've always owned dogs and right now, my flatmate's alergic - SOO...

Now, it's a sunny beautiful day outside. I'm sleepy as hell, but it's time to paint watercolors outside before it's cold again next week.
Posted by Unknown at 1:54 PM 3 comments: Links to this post 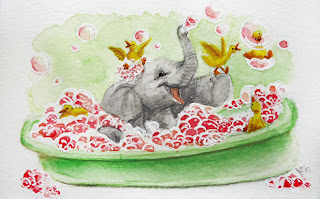 This was a very interesting palette to work with - and I didn't choose it. It was randomly created for me by a 1 year old. Interesting things happen when you work with kids now and then...
Posted by Unknown at 4:40 PM No comments: Links to this post 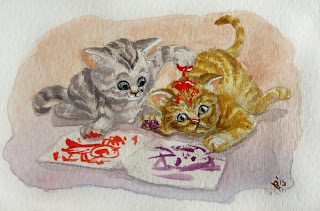 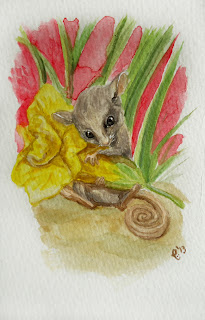 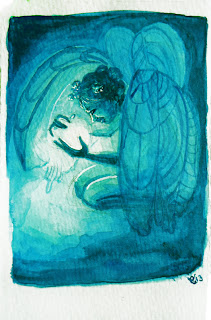 Some more tiny watercolors I've been working on. And when I mean tiny, I mean tiny...

I'm particularly happy with the last one. Those wings - they'd be fun to flutter around in, wouldn't they?
Posted by Unknown at 3:51 PM No comments: Links to this post 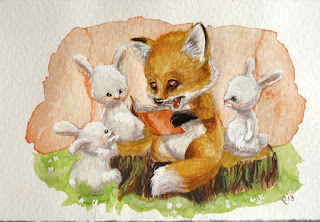 Spring is coming up: you can tell. The sun stays longer, the days are getting warmer, flowers are starting to pop up, and I've got an irresistible urge to draw bunnies and foxes and kittens. Well, the foxes aren't new: I admit it, I'm a fox-oholic.

Posted by Unknown at 11:52 PM 2 comments: Links to this post